Aptly nicknamed the Eternal City, Rome is the birthplace of the Roman Empire, one of the world's greatest civilizations ever.

Rome is known for historic sites, nightlife, and museums. Your plan includes some of its best attractions: explore the ancient world of Colosseum, contemplate the long history of St. Peter's Basilica, take in the architecture and atmosphere at Church of St. Louis of the French, and admire the striking features of Pantheon.

Ahmedabad, India to Rome is an approximately 14.5-hour flight. The time zone changes from India Standard Time to Central European Standard Time, which is usually a -4.5 hour difference. When traveling from Ahmedabad in February, plan for colder days in Rome, with highs around 16°C, while nights are slightly colder with lows around 5°C. Wrap up your sightseeing on the 5th (Thu) to allow time to take a train to Florence.
more less

Things to do in Rome

Birthplace of the Italian Renaissance

Considered a cultural, artistic, and architectural jewel of Italy, Florence is the birthplace of the Italian Renaissance.

Go for a jaunt from Florence to Pisa to see Leaning Tower of Pisa about 1h 20 min away. There's still lots to do: admire the masterpieces at Gallerie Degli Uffizi, make a trip to Piazzale Michelangelo, enjoy breathtaking views from Campanile di Giotto, and examine the collection at Pitti Palace.

Traveling by train from Rome to Florence takes 2.5 hours. Alternatively, you can drive; or fly. Expect a daytime high around 17°C in March, and nighttime lows around 6°C. Finish up your sightseeing early on the 8th (Sun) so you can go by car to Venice.
more less

Things to do in Florence

Virtually unchanged for the last six centuries, Venice is actually a group of islands made famous by a series of canals, bridges, monuments, piazzas, and narrow pedestrian lanes.

When in Venice, make a side trip to see Scrovegni Chapel in Padua, approximately Padua away. Next up on the itinerary: contemplate the waterfront views at Canal Grande, explore the world behind art at Gallerie dell'Accademia, get to know the fascinating history of Piazza San Marco, and take a stroll through Campo del Ghetto.

To see ratings, more things to do, where to stay, and other tourist information, read Venice tour planning site.

Getting from Florence to Venice by car takes about 3 hours. Other options: take a train; or fly. In March in Venice, expect temperatures between 17°C during the day and 5°C at night. Finish up your sightseeing early on the 11th (Wed) so you can travel to Barcelona.
more less

Things to do in Venice

Jewel of the Mediterranean

Barcelona, the country’s second-largest city, is a cosmopolitan urban center known for its throbbing youthful energy and stellar architecture.

Barcelona is known for parks, nightlife, and museums. Your plan includes some of its best attractions: pause for some serene contemplation at Basilica of the Sagrada Familia, take a stroll through Las Ramblas, see the interesting displays at Carrer del Mirador del Palau Nacional, and explore the world behind art at Museu Picasso.

Discover how to plan a Barcelona trip in just a few steps with Inspirock's itinerary builder.

You can fly from Venice to Barcelona in 5.5 hours. Other options are to drive; or take a train. Plan for a bit warmer nights when traveling from Venice in March since evenings lows in Barcelona dip to 9°C. Finish your sightseeing early on the 15th (Sun) so you can travel to Lisbon.
more less

Things to do in Barcelona 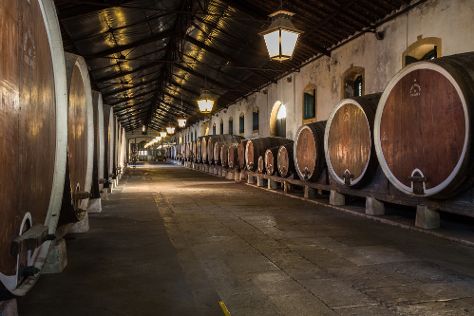 Built on seven hills, Lisbon has experienced a renaissance in recent years, making it the cultural star of Portugal.

Explore Lisbon's surroundings by going to Sintra (Quinta da Regaleira & Castelo dos Mouros). And it doesn't end there: explore the historical opulence of Castelo de S. Jorge, admire the masterpieces at Museu Calouste Gulbenkian, make a trip to Belém Tower, and examine the collection at Museu Nacional do Azulejo.

To find other places to visit, ratings, traveler tips, and other tourist information, read our Lisbon trip builder site.

Things to do in Lisbon

A history spanning over a thousand years, vibrant nightlife, and a mix of Georgian and modern architecture make Dublin a popular European tourist destination.

Dublin is known for museums, nightlife, and parks. Your plan includes some of its best attractions: examine the collection at Kilmainham Gaol Museum, steep yourself in history at Guinness Storehouse, walk around Phoenix Park, and catch a live event at Croke Park Stadium Tour & GAA Museum.

For where to stay, traveler tips, and tourist information, read our Dublin trip planner.

Traveling by flight from Lisbon to Dublin takes 6 hours. Alternatively, you can do a combination of car and ferry; or take a bus. Plan for little chillier temperatures traveling from Lisbon in March, with highs in Dublin at 10°C and lows at 1°C. Finish up your sightseeing early on the 24th (Tue) so you can travel to London.
more less

Things to do in Dublin

Vibrant and noisy, London is one of the world’s leading cities, an international capital of culture, education, fashion, music, finance, trade, and politics.

London is known for museums, nightlife, and historic sites. Your plan includes some of its best attractions: admire the masterpieces at National Gallery, get a new perspective on nature at Natural History Museum, ponder the world of politics at Houses of Parliament, and take in panoramic vistas at Coca-Cola London Eye.

To find reviews, traveler tips, other places to visit, and other tourist information, refer to the London trip planner.

Things to do in London

A beautiful and romantic city fit for any itinerary, Paris brims with historic associations and remains vastly influential in the realms of culture, art, fashion, food and design.

Go for a jaunt from Paris to Versailles to see Palace of Versailles about 48 minutes away. There's lots more to do: make a trip to Eiffel Tower, admire the masterpieces at Musee d'Orsay, take a stroll through Montmartre, and take in the architecture and atmosphere at Basilique du Sacre-Coeur de Montmartre.

To see traveler tips, reviews, other places to visit, and other tourist information, go to the Paris trip tool.

You can take a train from London to Paris in 3.5 hours. Other options are to fly; or do a combination of car and train. The time zone difference when traveling from London to Paris is 1 hour. In March, plan for daily highs up to 13°C, and evening lows to 3°C. Finish your sightseeing early on the 3rd (Fri) so you can take a train to Brussels.
more less

Things to do in Paris

The allure of the multi-cultural capital, Brussels, stems from its mix of political intrigue, artistic influence, historical significance, and a thriving social scene.

Explore Brussels' surroundings by going to Bruges (Huisbrouwerij De Halve Maan, Basilica of the Holy Blood, &more). And it doesn't end there: make a trip to Grand Place, admire the masterpieces at Musées Royaux des Beaux-Arts de Belgique, pause for some photo ops at Manneken Pis, and see the interesting displays at Musical Instruments Museum (MIM).

Traveling by train from Paris to Brussels takes 2.5 hours. Alternatively, you can drive; or fly. When traveling from Paris in April, plan for a bit cooler days and about the same nights in Brussels: temperatures range from 15°C by day to 4°C at night. Finish your sightseeing early on the 7th (Tue) to allow enough time to drive to Amsterdam.
more less

Things to do in Brussels

Venice of the North

Known as one of the greatest small cities in the world, Amsterdam charms visitors with its cool and cozy atmosphere.

Amsterdam is known for museums, nightlife, and breweries & distilleries. Your plan includes some of its best attractions: see the interesting displays at Anne Frank House, explore the world behind art at Van Gogh Museum, admire nature's wide array of creatures at ARTIS, and wander the streets of The Jordaan.

To see photos, ratings, other places to visit, and other tourist information, go to the Amsterdam trip planning app.

Drive from Brussels to Amsterdam in 2.5 hours. Alternatively, you can take a train; or fly. In April, plan for daily highs up to 15°C, and evening lows to 5°C. Wrap up your sightseeing on the 10th (Fri) early enough to travel to Prague.
more less

Things to do in Amsterdam

City of a Hundred Spires

Prague is known for historic sites, nightlife, and museums. Your plan includes some of its best attractions: explore the historical opulence of Prague Castle, steep yourself in history at Vyšehrad National Cultural Monument, wander the streets of Lesser Town, and take an in-depth tour of Jewish Museum in Prague.

For other places to visit, reviews, traveler tips, and more tourist information, use the Prague trip itinerary planning tool.

Traveling by flight from Amsterdam to Prague takes 5 hours. Alternatively, you can drive; or take a train. April in Prague sees daily highs of 17°C and lows of 5°C at night. Wrap up your sightseeing on the 15th (Wed) to allow time to travel to Vienna.
more less

Things to do in Prague

Vienna is known for historic sites, museums, and nightlife. Your plan includes some of its best attractions: admire the striking features of Schonbrunn Palace, pause for some serene contemplation at St. Stephen's Cathedral, browse the exhibits of Belvedere Palace, and browse the eclectic array of goods at Vienna Naschmarkt.

To see photos, where to stay, more things to do, and other tourist information, read our Vienna trip itinerary site.

Traveling by flight from Prague to Vienna takes 3.5 hours. Alternatively, you can drive; or take a shuttle. April in Vienna sees daily highs of 19°C and lows of 6°C at night. Finish up your sightseeing early on the 19th (Sun) so you can go by car to Budapest.
more less

Pearl of the Danube

You might consider the city of Budapest, divided by the Danube River into two distinctive cities--Buda and Pest--to be essentially one large World Heritage Site.

Budapest is known for historic sites, spas, and nightlife. Your plan includes some of its best attractions: don't miss a visit to Fisherman's Bastion, appreciate the history behind Heroes' Square, steep yourself in history at Matthias Church, and snap pictures at Szechenyi Lanchid.

For more things to do, where to stay, and other tourist information, use the Budapest trip itinerary maker site.

Drive from Vienna to Budapest in 2.5 hours. Alternatively, you can fly; or take a train. Expect a daytime high around 20°C in April, and nighttime lows around 5°C. Cap off your sightseeing on the 23rd (Thu) early enough to travel to Istanbul.
more less

Things to do in Budapest

A physical and cultural bridge between Europe and Asia, the transcontinental city of Istanbul serves as a living reminder of the Roman, Byzantine, and Ottoman empires.

Istanbul is known for historic sites, museums, and shopping. Your plan includes some of its best attractions: take in the spiritual surroundings of Hagia Sophia, get engrossed in the history at Topkapi Palace, browse the eclectic array of goods at Kapali Carsi, and admire the landmark architecture of Dolmabahce Palace.

To see other places to visit, where to stay, maps, and more tourist information, refer to the Istanbul online road trip planner.

Things to do in Istanbul