Paris of the North

The cultural and economic hub of northern Norway, Tromso boasts a historical city center containing one of the highest concentrations of wooden houses in Europe.

Popular historic sites such as The Arctic Cathedral and Tromso Domkirke are in your itinerary. You'll explore and learn at The Polar Museum and Profil Glassdesign. Go for a jaunt from Tromso to Lyngseidet to see The Steindal's Glacier about 1h 45 min away. There's still lots to do: get a dose of the wild on a nature and wildlife tour, get up close to creatures of the deep with a dolphin and whale watching tour, view the masterpieces at Lone Slydahl, and get curious at Polaria.

To find maps, where to stay, photos, and other tourist information, you can read our Tromso online trip builder .

Sydney, Australia to Tromso is an approximately 28-hour flight. You can also do a combination of flight, bus, and car; or do a combination of flight and ferry. The time zone difference moving from Australian Eastern Standard Time (New South Wales) to Central European Time is minus 9 hours. While traveling from Sydney, expect cooler days and a bit cooler nights in Tromso, ranging from highs of 9°C to lows of 2°C. Wrap up your sightseeing on the 31st (Sun) to allow time to travel to Alta.
more less

Things to do in Tromso

The Arctic Cathedral, The Steindal's Glacier
Find places to stay May 24 — 31:
Hotels on TripAdvisor
Homes on Airbnb
Highlights from your plan
©
Nature & Wildlife Tours

©
Alta is the most populated municipality in Finnmark county, Norway. Your inner history buff will appreciate Alta Museum - World Heritage Rock Art Centre and Northern Lights Cathedral. Museum-lovers will get to explore Northern Lights Observatory at Haldde and Tirpitz Museum. There's lots more to do: identify plant and animal life at Wildlife Areas, explore the stunning scenery at Alta Canyon, make a trip to Bubbelen, and pause for some serene contemplation at Alta Church.

To find other places to visit, more things to do, photos, and other tourist information, go to the Alta sightseeing planner.

Traveling by flight from Tromso to Alta takes 2.5 hours. Alternatively, you can do a combination of bus and car; or take a bus. In May, plan for daily highs up to 11°C, and evening lows to 2°C. Cap off your sightseeing on the 3rd (Wed) early enough to go by car to Nordkapp Municipality.
more less

Things to do in Alta

Museums Historic Sites Outdoors
Find places to stay May 31 — Jun 3:
Hotels on TripAdvisor
Homes on Airbnb
Highlights from your plan

Some 200,000 visitors take a trip to Nordkapp Municipality every year, drawn by its two main attractions--North Cape and Knivskjellodden, considered by many the northernmost point of Europe.

For more things to do, maps, photos, and other tourist information, go to the Nordkapp Municipality attractions planner.

Things to do in Nordkapp Municipality

©
The Gallery - East of the Sun 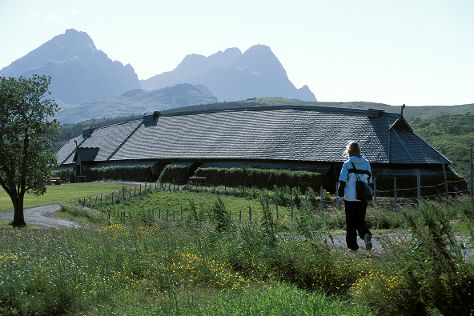 ©
Leknes is a town in Nordland county, Norway. Your inner history buff will appreciate Henningsvaer and Lofoten Museum. Museum-lovers will appreciate Lofotr Viking Museum and Lille Kabelvag art gallery and museum. Change things up with these side-trips from Leknes: Svolvaer (Lofoten Krigsminnenmuseum & Fishing Charters & Tours) and Galleri Lofoten (in Henningsvaer). There's still lots to do: head off the coast to Lofoten Island, take in the architecture and atmosphere at Flakstad Church, and view the masterpieces at Sareptas Hus.

To find traveler tips, photos, ratings, and other tourist information, use the Leknes attractions planning site .

You can fly from Nordkapp Municipality to Leknes in 8.5 hours. Other options are to drive; or do a combination of bus and car. In June in Leknes, expect temperatures between 14°C during the day and 8°C at night. Finish your sightseeing early on the 9th (Tue) to allow enough time to drive to Stokmarknes.
more less

Things to do in Leknes

©
Stokmarknes is a small town in the municipality of Hadsel in Nordland county, Norway. Start off your visit on the 10th (Wed): see the interesting displays at Hurtigruten Museum and then take in the exciting artwork at Galleri Uvaer. Get ready for a full day of sightseeing on the 11th (Thu): view the masterpieces at Jennestad Trading Post and then examine the collection at Vesteralen Museum.

Use Inspirock's suggestions to plan your Stokmarknes trip and find the best activities and attractions for your vacation.

Drive from Leknes to Stokmarknes in 3 hours. In June, daily temperatures in Stokmarknes can reach 15°C, while at night they dip to 8°C. Wrap up your sightseeing on the 11th (Thu) early enough to travel to Bodo.
more less

Things to do in Stokmarknes

©
Let the collections at Norsk Luftfartsmuseum and Bodo City museum - Nordland Museum capture your imagination. Step out of Bodo to go to Fauske and see Sjunkhatten nasjonalpark, which is approximately 1h 15 min away.

For traveler tips, more things to do, maps, and other tourist information, read our Bodo trip maker app .

Getting from Stokmarknes to Bodo by car takes about 6 hours. In June, plan for daily highs up to 15°C, and evening lows to 9°C. Wrap up your sightseeing on the 19th (Fri) early enough to travel back home.
more less

Things to do in Bodo