Plan created by another user. Make it yours
Start from...
1
Bandar Abbas
— 8 nights
2
Shiraz
— 8 nights
End at...
See full calendar

©
Bandar Abbas or Bandar-e ‘Abbās, also romanized as Bandar ‘Abbās and Bandar ‘Abbāsī; formerly known as Cambarão and Porto Comorão to Portuguese traders, as Gombroon to English traders and as Gamrun or Gumrun to Dutch merchants, also Jaroon and Cameron, is a port city and capital of Hormozgān Province on the southern coast of Iran, on the Persian Gulf. Venture out of the city with trips to Hormoz (Hormuz Statues Valley and Coast & The Museum and Gallery of Dr. Ahmad Nadalian). There's lots more to do: step off the mainland to explore Hormuz Island, contemplate the long history of Galeh-Dari Bath, identify plant and animal life at BandarAbbas Bird Garden, and contemplate in the serene atmosphere at Hindu Temple.

For reviews, ratings, other places to visit, and more tourist information, go to the Bandar Abbas sightseeing planning site.

Use the Route module to see travel options from your home to Bandar Abbas. In September in Bandar Abbas, expect temperatures between 43°C during the day and 32°C at night. You will leave for Shiraz on the 24th (Thu).
more less

Things to do in Bandar Abbas

Hormoz
Find places to stay Sep 16 — 24:
Hotels on TripAdvisor
Homes on Airbnb
Highlights from your plan

©
The Museum and Gallery of Dr. Ahmad Nadalian 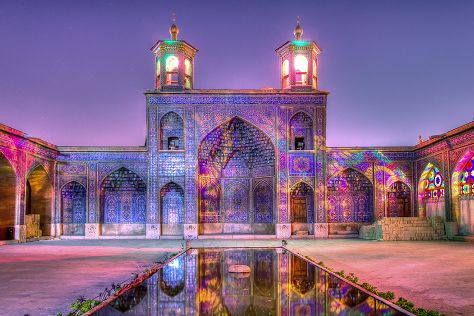 Explore the numerous day-trip ideas around Shiraz: Pasargad (Tomb of Cyrus, Pasargad, &more), Persepolis (Persepolis, Naqsh-e Rajab, &more) and Estakhr (in Marvdasht). Next up on the itinerary: contemplate in the serene atmosphere at Nasir al-Mulk Mosque, contemplate the long history of Qavam House, browse the eclectic array of goods at Vakil Bazaar, and appreciate the history behind Tomb of Hafez.

For ratings, where to stay, other places to visit, and tourist information, refer to the Shiraz travel route planner.

You can fly from Bandar Abbas to Shiraz in 6 hours. Other options are to drive; or take a train. Traveling from Bandar Abbas in September, you will find days in Shiraz are a bit cooler (39°C), and nights are cooler (17°C).
more less

Things to do in Shiraz